Trail of the Tin DragonBlazing the Trail

How To Beat Food Cravings

In the last post I wrote about diets that can help you lose weight quick. If you follow a plan like that and want to succeed, you’ll need to know how to beat food cravings.

In fact, however you lose weight, fast or slow, those pesky cravings will come up sooner or later, that’s for certain sure. Why? Because our bodies are made that way. The body figures out that there’s less of a sugar hit coming in than there used to be, and instinctively it yells at you: “GET MORE FOOD!” You may not even be hungry. And guess what? You don’t have to obey.

So here is the key to:

How to beat your food cravings

So when you have followed the fast diet plan for several days, or maybe even several hours, you will start feeling a strong desire to eat something that has some or all of the ingredients that you are avoiding. I won’t name foods because this is one thing to know, that seeing those foods in real life or pictures or even reading their names is likely to make you start fantasizing about eating them.

Stamp on the thought

And fantasizing about eating them is the number one thing NOT to do. The minute one of those foods pops up in your mind you need to stamp on that thought HARD. Avoid that aisle in the store. Walk away from the table in the office where they put the homecooked whatever. And do something else with your mind like find a crossword clue to solve or play a video game. Or if you are in the office, what the hell, you could even do some work 🙂

It’s poison to you

You can also remind yourself that most of the so-called “foods” that the manufacturers and restaurant chains are trying to sell us, are actually NOT REAL FOODS and to anyone who is overweight, they may as well be POISON.

They have been stripped of most of their vitamins and minerals. Then sometimes they add them back to make the stuff sound healthy (which it’s not). Then different chemicals are added to make the product as appealing as possible to the taste buds, and to hell with what it does to our bodies.

Eat enough of the good stuff

If you are constantly hungry then of course your body will let you know it wants to eat, and most likely it will prompt you for a quick hit of carbs. You can stop this whole cycle happening by eating plenty of healthy food, focussing on protein, veggies and a low carb plan like Metabolic Renewal for women to keep your blood sugar levels stable throughout the day. You’ll be surprised how you even stop thinking about food for long periods!

Cravings lie to you 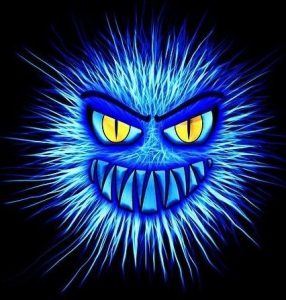 The cravings monster LIES to you

Cravings will tell you lies. For example, if you didn’t stamp on the thought quick enough and you find yourself fantasizing about a food, you will likely start believing that your craving is impossible to beat. It feels like the more you resist, the stronger it will grow, until it is overwhelming and you are completely dominated by it and you have no choice but to cave. And since caving is inevitable in the end, you may as well cave now, right?

WRONG! It is a LIE that cravings will grow stronger if you ignore them. Some will feel stronger than others, but the truth is that as you ignore them more and more, they will gradually grow weaker.

If you have ever quit smoking or anything else, you will know this. If not, talk to someone who did. Or just look at them! Say they quit smoking two years ago. Do they look like they are in the grip of a tobacco craving that has grown stronger and stronger over all of those two years, so that now they cannot see a pack of cigarettes without writhing on the floor fighting an overwhelming urge to smoke? No, right?

Maybe they were like that two years ago when they first stopped. Maybe that state got worse for a few days. Maybe they will tell you the third day or the third week was harder than the first (if they even remember). But after that, IT GETS BETTER.

You do not beat food cravings by giving in to them. That’s their lie. You beat them by ignoring them.

So when you are hit with a craving, walk away for a second (because moving your body can change what you’re thinking) and just REMEMBER what that food actually did to you. Not the taste of it, which always seems better in our imagination like the old “grass is always greener” proverb. But how you will feel a half hour or an hour after eating it.

Sometimes a diet can seem real restrictive. You may get angry at what feels like a prison. But the truth is the opposite. When we overeat all the time, we are addicted, we are slaves to those chemical non-foods. By resisting the craving, you will be FREE.

And that is how to handle cravings – have a strong determination to be free.


Posted in Dating by Finn with no comments yet.